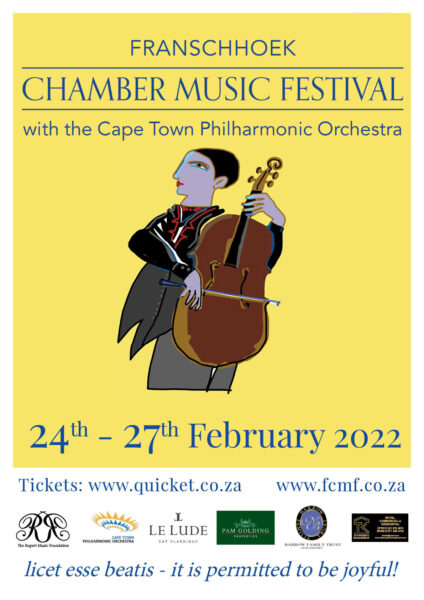 The town of Franschhoek is in a frenzy to host the town’s first four-day chamber music festival at the end of February, which promises to be a world-class event.

The festival’s anchor is the ten official chamber music concerts (complete program below) performed by musicians from the Cape Town Philharmonic Orchestra. Several additional performances and exhibitions (music and the visual arts), special meals, and MCC tastings have already been planned.

The organizers want to involve as many villagers as possible in the festival, which will offer visitors and concert-goers a miscellany of chamber music and unique Franschhoek experiences. A leaf is taken from the successful approach and participation characteristic of the Napa Valley chamber music festivals in California and the Lugano Festival in Switzerland. But the local authenticity of Franschhoek’s own and unique style and presentation remains the driving force of the festival, says Alisha.

The festival is the brainchild of Nic and Ferda Barrow, owners of the Le Lude Estate, while the Rupert Music Foundation, chaired by Hanneli Rupert-Koegelenberg, was an immediate founding sponsor. The real estate group Pam Golding (Paarl) is also a sponsor.

“Everyone is delighted that musicians from the Cape Town Philharmonic Orchestra will perform several masterpieces in a chamber concert style,” says Nic. “Given what the town has to offer, the chamber music festival is overdue long, especially now that so many music lovers and connoisseurs are desperate to experience another intimate occasion of excellence again. And there is no better place than this town to combine chamber music with haute cuisine, world-class MCC, and fine art,” he says. 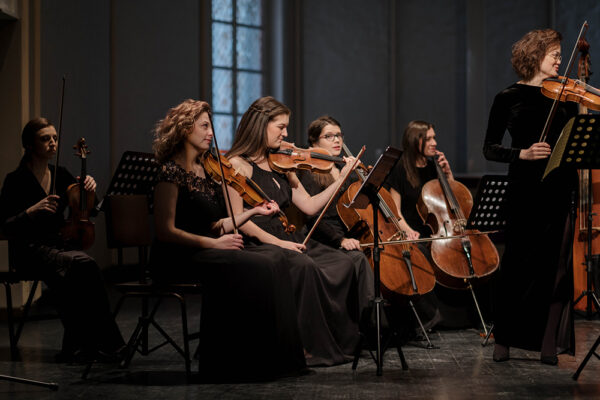 The official concerts will take place mainly in the Dutch Reformed Church (where an elevated stage will be built), with the Chamber Music Hall of the old wine cellar of the La Motte Estate also hosting. Impromptu and smaller concerts and performances will take place in the cellars of Le Lude, various estates, restaurants, and guest houses.

This will be accompanied by MCC tastings and specialty cooking that will take place before or after some of the special concerts.

Louis Heyneman, the CEO of the CPO, says he expects the Franschhoek Festival to be exceptional, specifically because chamber music is an intimate and incomparable experience. Many describe it as “the music of friends” and conveys a sense of togetherness, healing, wellness, and compassion to people who share an appreciation for it.

“A festival like this is manna from heaven for musicians, mainly because they stagnate if they are not so challenged. They then do not become bored passengers in large ensembles. When Nic Barrow presented the KFO collaboration in a new festival like this, we immediately saw the opportunity to introduce our musicians in small groups to a unique audience. A formal concert hall is often intimidating for newcomers. In the context of a friendly, intimate chamber music festival, the concert-goers and musicians come into close contact, making the experience extraordinary.

“Music as part of the underpinning of society plays a vital role in binding communities and building bridges of social cohesion,” says Louis.

Because the festival is planned as a “four-day highlight” for concert-goers – from Thursday, February 24 to Sunday – it is a long weekend of exceptional chamber music for dedicated music lovers. For people with limited time, every concert on any given day will be a memorable experience. The initial offering of only 10 formal concerts is planned and conveniently spaced to allow attendees to attend all but still leaves plenty of time for adventures in between.

“None of the concerts overlap, and there will be plenty of time to visit restaurants or enjoy the hospitality and experiences that Franschhoek offers,” adds Louis.

The art doyenne Ilse Schermers Griesel is the festival’s curator of visual art. As the owner of IS Art, she has a rich history in the art culture of Franschhoek and the Boland region. 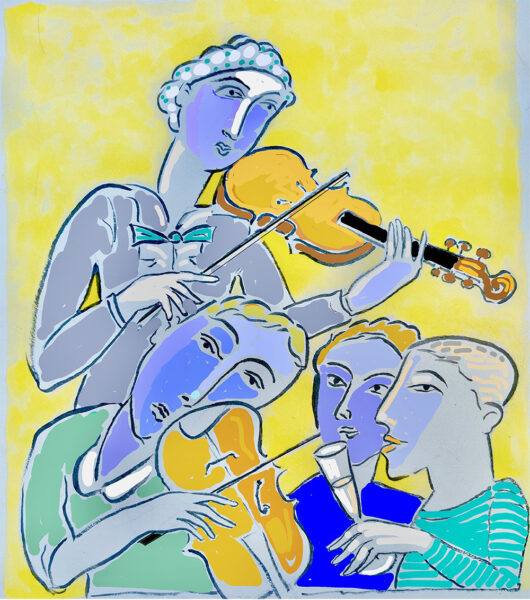 The festival artist is Jan Vermeiren, who designed the festival’s official visual image. Although Jan was born in Belgium in 1949, he is known as a South African post-war and contemporary painter who has exhibited widely locally and abroad. An exhibition of his latest creations will be combined with the work of other contemporary South African artists in many mediums. Ceramic and sculptural work will be part of the exhibition, including the work of Anton and Esra Bosch (the son and daughter of Esias Bosch).

The wine curator of the festival, the well-known wine writer Emile Joubert, says various tastings for select MCC and other wine cultivars will be presented daily. “Every select MCC or excellent wine is a symphony for the senses and a stimulus to people’s tastes. And it, like all art, stirs the soul, says Emile.

Currently on somewhat of a Champagne reconnaissance mission in the blossoming European spring, Ferda Barrow and her female progeny decided to make a necessary pit…

We will be sharing the daily, weekly and monthly happenings on the farm with you, right here in our news section. Also make sure that…